For some months now, I’ve been paying close attention to Des Pierrot (who you may recognize as @loverboyclub_ on Instagram). The young creative who’s based between New York and LA has been executing his visions as well as building a following of people and fellow creatives from various ranges that admire his works through social media. I initially took sight of his hand made apparel during the beginning of last year and i can attest to the fact that he has not slowed down not one bit. To shooting his work on models in the NY streets to having his work worn by stylist and model Aleali May to rappers like Famous Dex and Quavo, it aint hard to tell to Des Pierrot is here to take over. I had the opportunity to catch up with the founder and designer to breakdown the inspo of his .01 collection pieces. 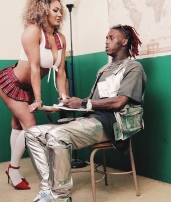 According to Des “I honestly just make shit that I like, i don’t like to wear what everyone else is wearing so i make my own pieces”. He goes on to express that his clothing is inspired by his own take on things and what’s specifically cool to him from art to shapes, pockets, and color schemes and then brings those things to life in his designs. If anything for Des, it’s not more-so about being inspired by one thing but rather about how his clothing can inspire others, specifically the youth. Although Des does enjoy executing dope visions through clothing, he’s rather more interested in motivating and inspiring those who came from nothing and are trying to make a way for themselves.

There’s definitely more to come from the sought out designer but for now, be sure to check out the Des Pierrot Collection .01 (NYC) here, you wont regret it.